This is my notes on “Test-Driven Development by Example”, book by Kent Beck published in 2004. During the past year I have read quite a few books and some of them were related exclusively to TDD topic especially “Growing Object-Oriented Software guided by Tests” by Steve Freeman and Nat Pryce. After having that book read I felt that my understanding of TDD was much better than it had been before so I was going to read something else but then I watched a talk by Steve Freeman where he recommends reading “Test-Driven Development by Example” and also then recommends re-reading it every 1 or 2 years so valuable and deep this book is. So I decided to follow Steve’s advice and did read the book very thoroughly: now I see how two books complement each other so that it is hard to say where I learned what about TDD from, anyway the following is the summary of what makes Kent’s book special for my understanding and practice of TDD.

The two rules imply an order to the tasks of programming.

In other chapter the same order is described as “general TDD cycle”:

There is also a bit more detailed version which is called “rhythm of TDD”:

Write a failing automated test before you write any code

This quote appears to be very famous one:

I taught Bethany, my oldest daughter, TDD as her first programming style when she was about age 12. She thinks you can’t type in code unless there is a broken test. The rest of us have to muddle through reminding ourselves to write the tests.

I am the one who have been teaching himself to write tests and then write tests upfront during past 4 or 5 years however I still have to remind myself to follow this first rule of TDD. In iOS development it is sometimes tempting to skip “test first” part when you have to implement some UI feature on top of half-tested UI code: when I think about writing failing test for that new feature I know that I have to do quite a lot of exercises against iOS testing infrastructure (which is far from being mature yet) to make that UI test case to reflect my new feature and fail adequately and that makes me to procrastinate about writing that test first.

Somewhere in the middle of the book and at the same time while I was working on bunch of UI features of that kind I saw a dream where I was listening to a lecture by some university professor who was talking about importance of writing failing test first even in complex cases such as legacy UI code or lack of proper testing tool and infrastructure support. I don’t remember anything else from that dream anymore but memory of it now serves me very well as additional personal reminder of virtue of always following the first rule of TDD.

Three techniques for quickly getting to green

Return a constant and gradually replace constants with variables until you have the real code. (p.13)

Type in the real implementation.

How do you implement simple operations? Just implement them.

Fake It and Triangulation are teensy-weensy tiny steps. Sometimes you are sure you know how to implement an operation. Go ahead. For example, would I really use Fake It to implement something as simple as plus()? Not usually. I would just type in the Obvious Implementation. If I noticed I was getting surprised by red bars, then I would go to smaller steps… (p.154)

…There’s no particular virtue in the halfway nature of Fake It and Triangulation. If you know what to type, and you can do it quickly, then do it. (p.154)

How do you most conservatively drive abstraction with tests? Abstract only when you have two or more examples. (p.153)

If two receiving stations at a known distance from teach other can both measure the direction of a radio signal, then there is enough information to calculate the range and bearing of the signal. This calculation is called Triangulation.

By analogy when we triangulate, we only generalize code when we have two examples or more… When the second example demands a more general solution, then and only then do we generalize (p.16).

I only use Triangulation when I’m really, really unsure about the correct abstraction for the calculation. Otherwise I rely on either Obvious Implementation or Fake It. (p.154)

You want to maintain that red/green/refactor rhythm. Obvious Implementation is second gear. Be prepared to downshift if your brain starts writing checks your fingers can’t cash. (p.155)

Test is an Object

Very interesting side-effect Kent’s book produced was that I finally noticed and recognized incorrectness of semantics that is suggested by default Xcode templates and that I have been following blindly all those years.

When you create fresh Xcode project with “Include Unit Tests” mark enabled you end up with dummy unit test class generated automatically by Xcode:

There is one very bad semantic error that happens here: the class name for test case generated for project Triangle is in plural: TriangleTests: if my name of my test class has “Tests” postfix then I no longer treat it as an object, i.e. small machine that performs testing according to its well-defined scope, instead I have umbrella or bag with a bunch of tests most likely without a good cohesion between them.

Some years ago when I switched from Ruby on Rails with RSpec as BDD-style testing framework that I mostly used to iOS development and Xcode with their default xUnit-style: OCUnit and then XCTest – I couldn’t get how to live without nested describe blocks inside those MyTests: XCTestCase classes. Now having deeper insight into difference between two approaches: xUnit style and BDD style I now prefer xUnit style. What describe is in Cedar/Kiwi becomes one class in xUnit given that most often I can flatten too nested structure of my tests. This insight has very positive effect on how I organize integration and especially functional tests (test for UI components and groups of them taken in isolation from the whole iOS application as I have described in Test Automation for iOS).

In my example this test class should have singular name: TriangleTest. If there will be a large number aspects we can start creating classes one for each aspect: TriangleAspectTest or Triangle_Aspect_Test. That’s what I started doing on daily basis with functional tests: good example is mobile app’s screen with number of different success / failure user paths - in this case test class corresponds to one aspect of a feature that screen represents.

This topic is not covered in this book but still I have found indirect examples of Kent’s reasoning about fixtures which makes me think I am on the right track:

“In general if I find myself wanting a slightly different fixture then I start new subclass of Test Case.” (p.160)

Below see also “Self Shunt”: this technique makes sense only if classes have focus i.e. they are not the “lists of tests” but something more object- or better subject-oriented.

…Why do we need a separate object for the listener? We can just use the test case itself. The TestCase itself becomes a kind of Mock Object (p.145)

Broken Test is for solo programming:

How do you leave a programming session when you’re programming alone? Leave the last test broken… When you come back to the code, you then have an obvious place to start. (p.149)

Clean Check-in is for team programming:

How do you lave a programming session when you’re programming in a team? Leave all of the tests running.

How much feedback do you need?

given three integers representing the length of the sides of a triangle, return:

and throw an exception if the triangle is not well formed

He shows his implementation and 6 tests he wrote for this problem. He says that some tester wrote 65 tests for the same problem.

I have tried mine using Swift and I got 11 tests given I wanted to test incorrect input for all 3 sides: negative and zero-cases.

TDD’s view of testing is pragmatic. In TDD, the tests are means to an end–the end being code in which we have great confidence. If our knowledge of implementation gives us confidence even without test, then we will not write that test. Black box testing, where we deliberately choose to ignore the implementation, has some advantages. By ignoring the code, it demonstrates a different value system - the tests are valuable alone. It’s an appropriate attitude to take in some circumstances but that is different from TDD. (p.197)

There are two reasons for implementing xUnit yourself, even if there is a version already available:

The “no time for testing” death spiral

What happens when the stress level rises? The “no time for testing” death spiral: 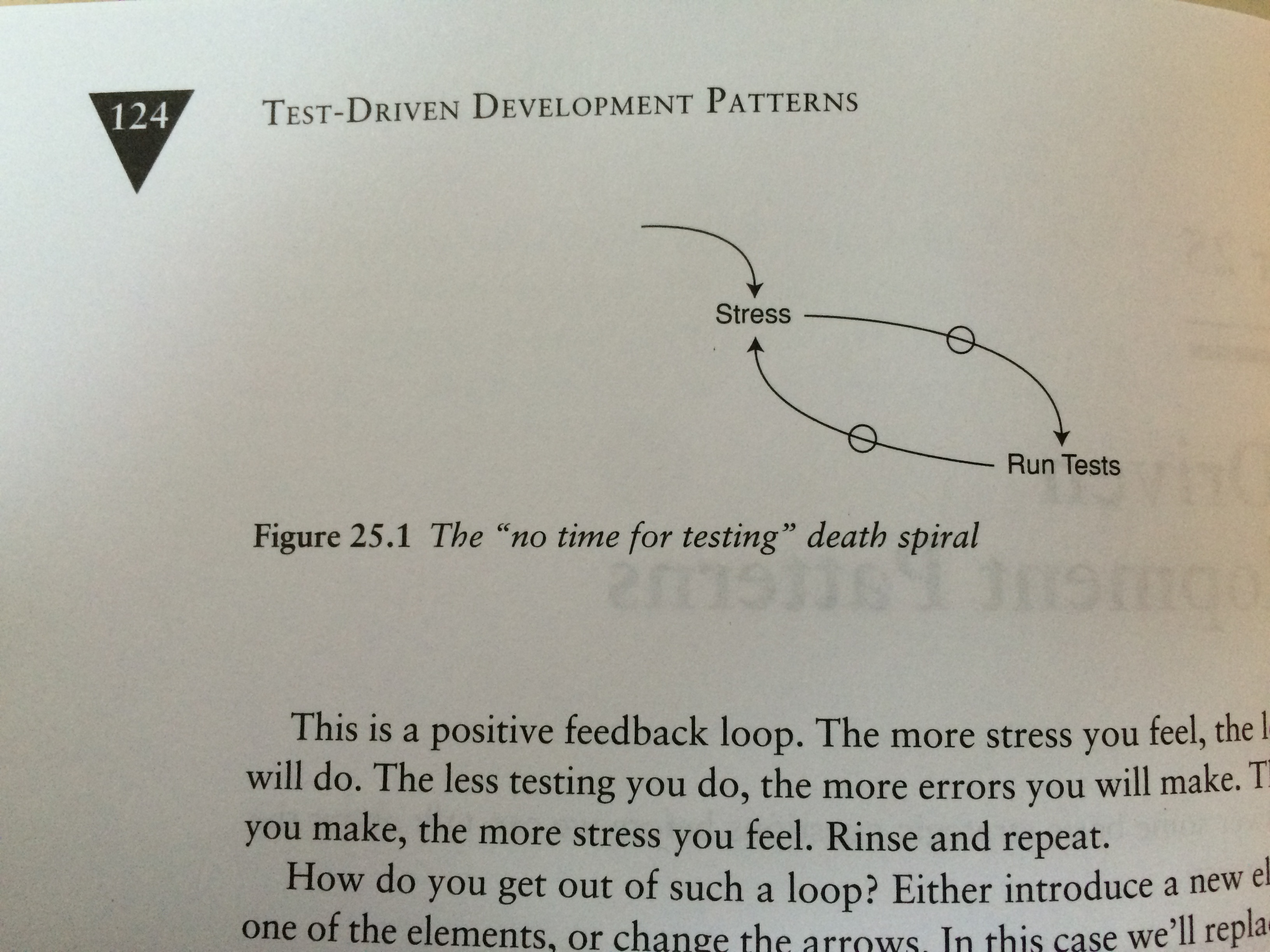 How do you get out of such a loop? Either introduce a new element, replace one of the elements, or change the arrows. In this case we’ll replace Testing with Automated Testing.

Did I just break something else with that change?” Figure 25.1 shows the dynamic at work. With automated tests, when I start to feel stress, I run the tests. Tests are the Programmer’s Stone, transmuting fear into boredom. “No, I didn’t break anything. The tests are all still green.” The more stress I feel, the more I run the tests. Running the tests immediately gives me a good feeling and reduces the number of errors I make, which further reduces the stress I feel.”

“We don’t have time to run the tests. Just release it!” The second picture isn’t guaranteed. If the stress level rises high enough, it breaks down. However, with the automated tests you have a chance to choose your level of fear. (p.124)

Not enough time to test reduces the available time 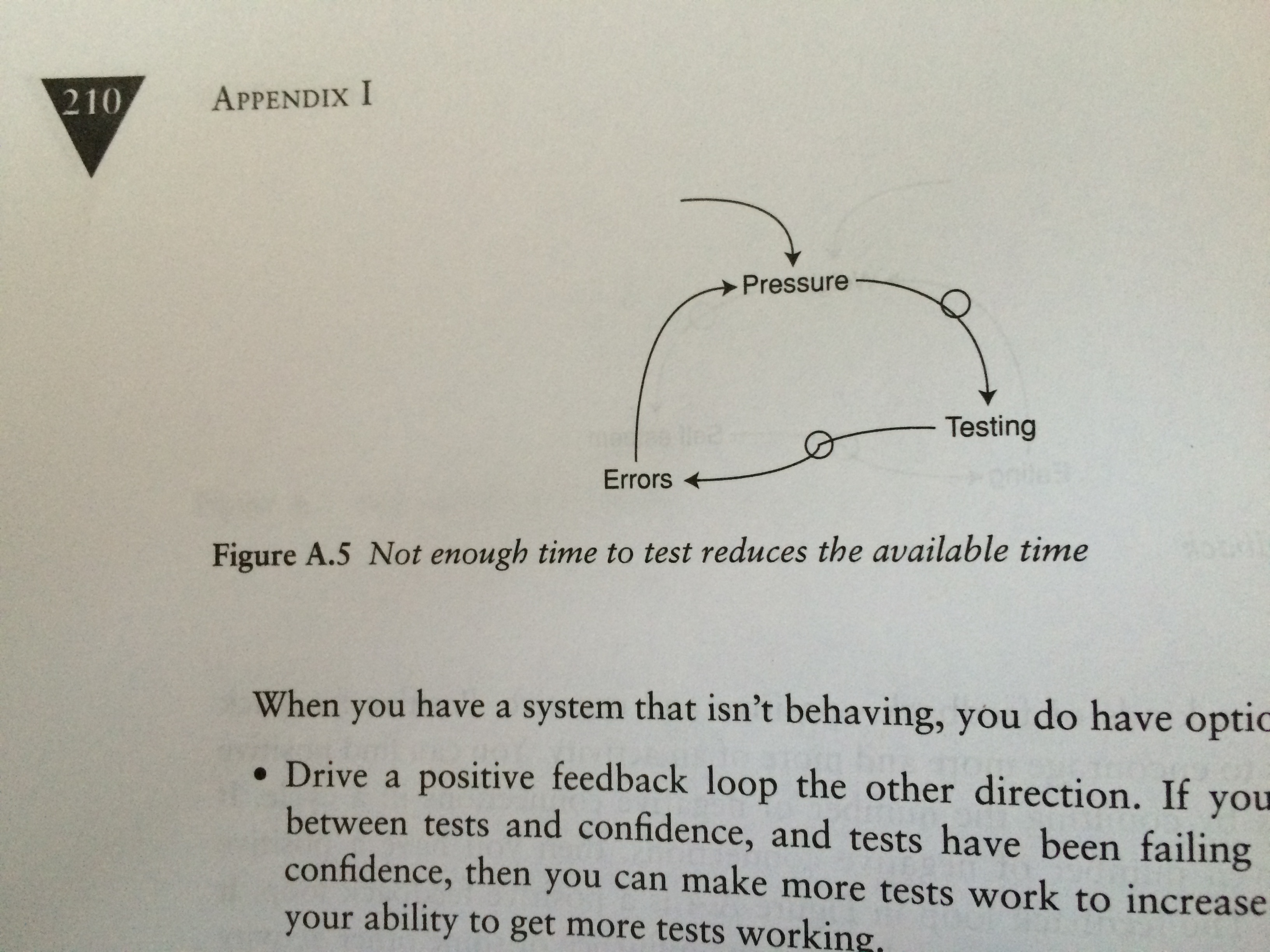 Figure A.5 Not enough time to test reduces the available time

When you have a system that isn’t behaving, you do have options.

When should you delete tests?

More tests are better, but if two tests are redundant with respect to each other, should you keep them both around? That depends on two criteria.

That said, if you have two tests athat are redundant with respect to confidence and communication, delete the least useful of the two.

Write tests until fear is transformed into boredom…

@sbpankevich: Reading TDDbE and hear Kent’s voice in my head: start with failing test, move slowly. Now I move as slowly as never did. Thanks @KentBeck !

This is the rule that I introduced for myself while reading this book. I started following it and it helped me to be more careful and conscious when I was doing some refactorings of critical parts of code at my work. Given infrastructure details of UI testing or Functional Testing in iOS, “1 minute” for me resorts to smallest possible step that I can make when starting from green state.

By taking and then publishing these notes I wanted to achieve two goals:

I have definitely managed to accomplish the first of the above goals but am not sure if I did succeed in the second: from my experience notes like these can at best expose no more than 10% of the overall information from subject so if you’re reading this and still didn’t read this book, make sure to read it - for me it is one of the best on my book shelf.